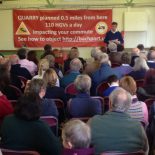 Burcot & Clifton Hampden for the Protection of the River Thames

A selection of just some of the many comments we have received,
from residents of Appleford, Culham, Long Wittenham, Clifton Hampden, Burcot and beyond

“The double traffic lights at Clifton Hampden frequently has traffic banked up in all directions. Cyclists commuting to the science centre with their children are already in peril on these narrow paths as cars whiz past at 60 mph. Adding HGVs to this is a tragedy waiting to happen.”

“I want to assure you that you have my full support with this and I will do everything I can as District Councillor to stop planning permission for the gravel pit being granted. I have already received a number of emails from local people with their objections and I would urge as many people as possible to do the same. I will be putting my comments forward shortly and the more objections I can receive from people the better.”

“How can such a huge impact on a rural community be contemplated? There are only country roads, which are prone to flooding, and cannot properly accommodate the traffic now. There are so many old and beautiful properties that will be affected by the influx of HGVs, not to mention the air and noise pollution! The proposal is daft!”

“We are worried about the increased flood risk, as each year this seems to be worse. We have also noticed an increase in the amount of noise from the existing gravel extraction [by Appleford].”

“I’m shocked! I regularly run this beautiful section of the river path – this would be monstrous to shoe-horn this site in here.”

“I feel very strongly that this proposal must be rejected because the effects on our community would be so serious and damaging in the future.”

“Local roads are not equipped to cope with this level of HGV traffic.”

“Vehemently opposed. Noise, pollution, mess, road problems – and all in a beautiful area with public right of way and on the doorstep of too many families. We’d be just across the river… Property values would plummet too. Ghastly thoughts all.”

“What worries me the most is flooding. The village has been flooding more frequently in the last few years and who knows what impact the development would have on this? When the roads are shut it also creates a lot of traffic problems.”

“Traffic through the village is already high. The river is a beautiful place to walk, and many footpaths would be unusable with these plans.”

“Please don’t ruin this beauty spot with a gravel pit!”

“The proposed site is situated on a flood plain, what will happen to our village if we see heavy rain?
Where will the water go?”

“We already experience heavy traffic and long delays in the area! This will make things a lot worse, plus we’ll lose a large chunk of our countryside, which slowly we are losing in this area.”

“Surely after the last floods the planners couldn’t take such an application seriously?”

“My child has just finished attending Clifton Hampden School. The village is in a beautiful Thames-side area and is not suitable to be subjected to a gravel and concrete processing plant. The village is used as a commuter rat run, and gets completely snarled up if there are issues on the A34, ancient bridges being closed off due to flooding and most recently the extensive roadworks in Oxford. The village could not cope with the additional traffic and pollution that it would be subject to. Also lorries hurtle through the lights and the increased traffic, especially lorries, would put childrens lives at risk. This plant should be stopped and not allowed, it is totally wrong for this area of natural beauty to be ruined.”